The Geography of Aarden 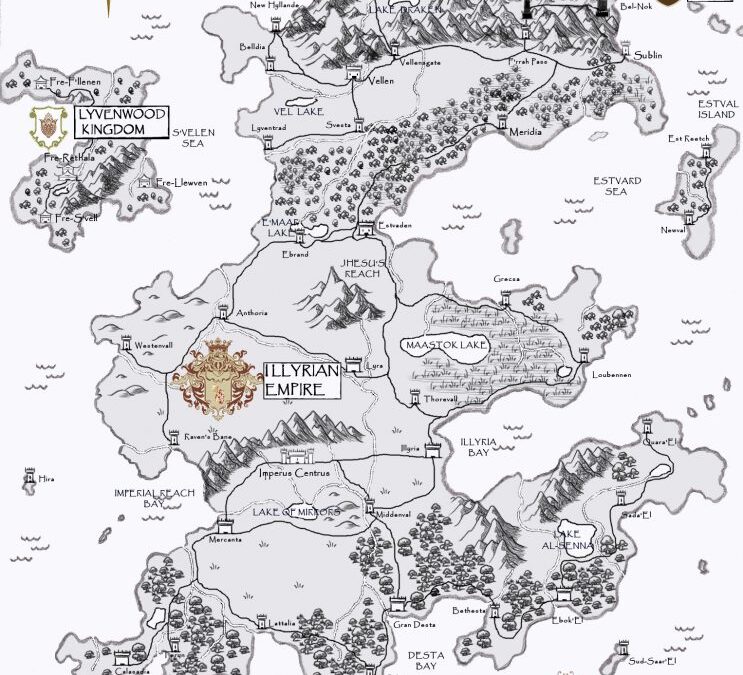 Aarden is the world as is known by men. Three continents have been documented; Illyria, Talunsa’bhaile to the west, and Therra to the East. Scholars insist two more continents must exist to provide homelands for the Orcs and Goblins. An orchish homeland is well-referenced by reliable sources and is believed to be north-east of Therra, but has never been documented by humans. The location of the goblin’s land of origin is completely unknown, though legends speak of a land to the south-east.

The Illyrian Continent is the homeland of the humans, governed by the goddess, Hira.  A diverse continent, Illyria has eight distinct regions; N’ydwallia, Meridia, Westenvall, Maastok, Desta, Sada’El, Llyvenwood, and Saarland. During the Darkness, Illyria was the epicenter of the conflict allowing elves and dwarves to invade, gaining strongholds that last until the present.

The mysterious homeland of the elves lays across a vast ocean to the west. Little is known outside the scant tales of the few travelers privileged enough to be afforded passage by the elves. The stories speak of a land bountiful in forests and lakes, along with plentiful wildlife. In the present day, this continent has become somewhat of a myth as no human has seen it in recent memory.

The “New World,” as it is known to Illyrians, lays to the east over a well-navigated ocean. Almost three times the size of Illyria, it is the homeland of the dwarves and home to large numbers of goblins as well as humans. The Illyrian Empire invaded the continent long ago once holding five provinces. Today humans call three provinces home where they reap great bounties in natural resources.

This mysterious land of Ad’Decopth is believed to lay north-east of Therra. This legendary homeland of the orcs has never been documented by humans. Dwarvish sources describe it as dominated by a rocky landscape with active volcanoes. Grasslands and swamps are said to be the only habitable areas, containing most of the orcish settlements.